Proposed by RACV, IA noted that the bicycle network is not currently meeting community needs and expectations of a safer, lower-stress and better-connected network. The next stage is for the RACV to identify initiatives and develop options

Proposed by the Committee for Greater Frankston, IA notes that public transport is not keeping up with population growth.

The initiative is for public transport connectivity improvements to, and through, Frankston. These could include optimising the existing bus network, increasing bus service frequency and coverage, plus upgrades to rail services and infrastructure.

The reporting date for this inquiry has been extended to 1 September 2020. The close of public submissions on 31 January prompted a flurry of coverage. PTUA says scrap it, Sally Capp (in a private capacity) says extend it. Basically, it’s a two-way split, PT advocates generally against, business / tourism / education in favour. Expect more in this Council election year.

BUSES
Boris promises £5b for buses

The UK will spend an extra £5b for London Style buses alongside their massive £100b high speed rail linking northern England to London.

The £5bn over five years would result in more frequent services, including on Sundays, a simpler fare structure, and new priority schemes to allow buses to skirt traffic jams.

Outside London, UK buses are notoriously infrequent and unreliable, and subject to savage cuts since Thatcher.

Divercity celebrates the many ways that our community welcomes newcomers to our glorious city by the bay.

We look at how Port Phillip’s Australia Day included both a homage our first nations people and a heartfelt welcome to people receiving the Australian citizenship from 42 different countries.

We also drop into a first-time parents group to see how our newest citizens and their carers are progressing. We look too at the great range of clubs, both social and sporting, that welcome new participants – crocket anyone, or will it be cricket? Plus we give a shout out to the volunteer Waterfront Welcomers that greet cruise ship passengers and crew as they disembark at Station Pier.

Add to this, four pages of events, many free or low cost, that invite you to join in the fun, education and entertainment that locals love. So much to do, so little time.

There’s also information about ways the Port Phillip people are reaching out to those affected by the bushfires in East Gippsland and North East Victoria.

Council now as an advisory committee on multicultural issues with a world of experience. Packed with familiar and new faces, the committee will help council make Port Phillip a more welcoming place for migrants, refugees and asylum seekers.
There’s also a call out from the South Melbourne Life Saving Club for more people to get involved and help them make the most of their beautiful and practical new facilities.
With climate a hot topic, its good to know that more trees will help keep us cool. Meet senior arborist Greg Mitchell who is part of a team adding over 1000 new trees every year to our streets and parks.
To prove that time does fly, its forty years since the first St Kilda Festival attracted 30,000 locals in 1982. We reconnect with MaryLou Jelbart, former St Kilda Councillor who helped start the event back in the day.
Homework has never been more fun than at the Homies Homework Club at Emerald Hill Library in South Melbourne. Meeting weekly just across from the famous Australian National Music Academy, the club attracted volunteer musicians from the academy who then introduced the Homies to an orchestra. Now that’s not your average homework.
Plus four pages of summer time events; festive, foreshore and community.
Readers also get a chance to say what they think about Council communications. Go for it! Welcome to the 100th edition of Divercity. With longer days (and hopefully warmer weather), we’ll all have more time to enjoy the great outdoors.

Paint in the Park at Gasworks is a three-hour out paint outdoor ‘competition’ over two weekends. It’s all about participation and inspiration, but there’s also remuneration with big cash prizes.

Also outdoors is a festival of everyday bike riding, the aptly named Tour de Moray (celebrating the spanking new bike track along Moray Street). There will be loads of fun, a scavenger hunt, pop-up attractions and free bike tune ups – you’ll be dinging your bells in delight.

Get down to Fitzroy Street for Luminous, a pop-up art attraction with visuals by five creative outfits. Marvel at the works of PluginHUMAN, Tom Gerrard, John Fish, filmmakers Nick Kozakis and Carl Allison, and recycled nylon sculpture by Elizabeth West. It will be Fitzluminous.

There’s also highlights from the local Senior’s Festival that will inspire swinging, singing and giggling.

Oh, and we look at Divercity covers over the years since we first started in 2001.

Enjoy. And thanks for participating. Looking for a walk in and start working office (suitable for up to 4 people) in the CBD? You’ll have exclusive access to 4 fully furnished workstations with high speed Wi-Fi in a spacious open plan office with four others.

The office has a casual professional look with a shared conference table, shared kitchen and access to networked printers and phones.

Looking for stable arrangement with trusted outfit. Must have positive professional outlook and ethical business.

$1650 pcm plus GST / $500 per desk pcm plus GST
Includes internet, power and cleaning (fortnightly)
Plus share of telecom
Plus cost of consumables

Music, arts, politics and the environment – the youth of Port Phillip are active, vocal and talented. Meet Ed, Meagan and Nina from the Youth Advisory Committee and read about what motivates them to get involved. There’s also great photographs of Semi and Jillian who are making their mark in art, the enviro club at Albert Park College and the finalists in the Resource Smart awards from St Columbas Primary.

Plus millions in election pledges coming our way, tackling the taggers and loads of local events.

In this issue, we meet some of the locals who care about homelessness.

On the cover are Henry and Mark from Father Bob’s Community Pantry. There’s also Donna who helps out by using her skills as a hairdresser. We’ve also got handy contacts for agencies that care and a list of places to get a free feed every day of the week..

You’ll also get an insight into the day-to-day struggles from the crew at the Port Phillip Community Group. We also take a look at Wintringham, an aged care service right here in Port Melbourne that welcomes people who have struggled with homelessness.

This edition also links seniors to a range of activities to keep them connected and social in the winter months and beyond.

And just to show off our love of compost, we look at Veg Out Community Gardens and Council’s community compost waste reduction ideas. You’ll learn about green cones that will put your FOGO in the zone.

Plus an amazing list of local events, including all the buzz from the St Kilda Film Festival.

All this and more in the latest Divercity.

From the colourful cover to the action packed event pages, Divercity showcases the style and substance of our neighbourhoods.

Meet Abuk and Afadang who bring the colour and style of South Sudan to life through their sewing collective. A few pages later, meet Susan and Ella who are leaders in theatre. Walk along the foreshore and you might stumble across David, a mathematician and artist reimagining paintings from the 19th century.

Plus there’s a pond built by volunteers near a 700 year old tree with a great Indigenous story. There’s also a snap of eco-teens exploring the reefs of Point Ormond with the Port Philip EcoCentre team.

And now there are more ways to better deal with e-waste – that ever growing collection of unwanted stuff we have in our houses, like old phone chargers, routers and alike.

All this and more in Divercity 97 March – April 19 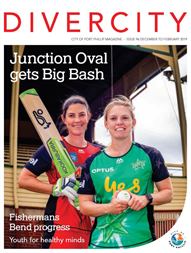 Catch a double dose of Women’s Big Bash cricket at the newly refurbished Junction Oval on the weekend of 1 and 2 December – it’s gold coin entry – howzat!

Stay up-to-date with the beach litter and drinking rules to keep you and yours safe over the busy summer months. While you’re at it, put the Pride March (Sunday 3 February) and St Kilda Festival (Sunday 10 February) in your diary – and join in the celebrations.

Are you thinking about doing some volunteering in the New Year? Council has a new volunteer’s portal with loads of ways to get involved. To get you started, we’ve listed some interesting volunteer ideas in a variety of fields.

Events, progress in parks, recycling tips and more,  all in the summer edition of Divercity. 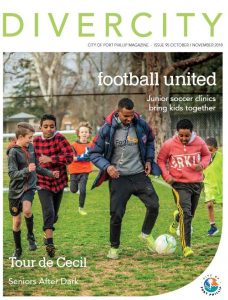 The latest Divercity is probably the most diverse we’ve ever produced – once again we showcase many ways that you can be more involved in your community.

Join others as they reflect on the centenary of Armistice Day in 1918. There’s a new peace garden and several neighbourhood walks to visit sites of significance related to WWI. You can learn about the War through the service stories of people from Heath Street in Port Melbourne – it’s fascinating and brings to life the service, sacrifice and enormity of events a century ago.

October also includes the Port Phillip Seniors Festival with three big dances to get feet tapping and hearts racing. Check the details alongside a range of other local events in October and November – including HOWLoween for doggies – woof woof.

Meet the stormwater detectives from Council who are using robot mounted CCTV to explore our stormwater drains and keep them flowing – watch for their nifty electric vehicle in a street near you soon.

On the cover, you’ll also meet Kamal who runs free soccer clinics for youngsters in Port Melbourne. As a refugee arriving in Australian in 2003, he’s followed an interest in football to get involved (and employed) in his community. Now he’s helping others enjoy the beautiful game and get involved.